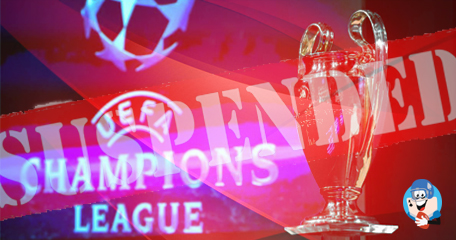 All European football is now suspended until further notice, following a video conference meeting with the general secretaries of all 55 UEFA member associations on Wednesday. UEFA, European football's governing body, has decided to suspend all its competitions due to the coronavirus pandemic. This means that all Champions League and Europa League matches are suspended, along with qualifying matches for the Women's Euro 2021 and national team matches that had been scheduled to take part in June.

The finals of the Champions League and Europa League have already been postponed, but now it is unclear whether the two competitions will be completed at all. UEFA president Aleksander Ceferin added more uncertainty to the situation last week, saying that the season could be lost if matches don't restart by the end of June. Ceferin said in an interview with Italian newspaper La Repubblica: "There is a plan A, B and C. The three options are to start again in mid-May, in June or at the end of June. There is also the possibility of starting again at the beginning of the next season, starting the following one later. We will see the best solution for leagues and clubs."

In the UEFA Europa League we had only the first leg of the round of sixteen played before all second-leg matches got postponed, while in the UEFA Champions League we know only four of the eight quarter-finalists. The qualified teams are RB Leipzig, Atalanta, Paris Saint-Germain and Atletico Madrid, while the other four have to be decided in the second legs of the respective last-sixteen ties.

All the second legs of the ties should normally be played when football returns to action, but after that UEFA might decide to condense the tournament and have the following rounds be played in a single knockout match instead of home and away legs. There is also the possibility of the finals being played on 27 June and 24 June, potentially at the end of mini tournaments to be played in Istanbul and Gdansk, Poland.