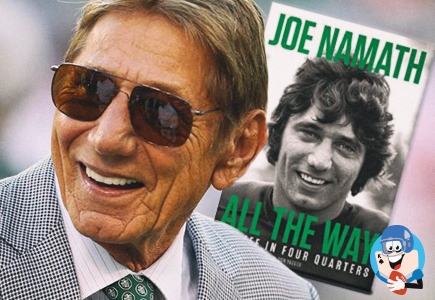 Joe Namath was a quarterback in the American Football League (AFL) and in the National Football League (NFL) after the AFL - NFL merger, which took effect in the late 1960's. Namath, known as 'Broadway Joe,' led the New York Jets to an upset win (16 - 7) against the heavily favored Johnny Unitas the Baltimore Colts in Super Bowl III (January 12th, 1969) after guaranteeing a win prior to that Super Bowl game.

Although he was a highly successful professional football star as well as a media celebrity, he has had an extremely difficult life plagued with alcoholism and health issues resulting from concussions that he suffered while playing quarterback.

'Broadway Joe' had a reputation for being a playboy and a person who liked to drink and party, but I don't think anyone knew how bad of an alcoholic he had become aside from his close personal family and friends. His book explains how close he was to drinking himself to death once his professional football playing days were over.

He goes on to say that a voice in his head told him to drink to an excessive level. Namath named the voice in his head, ‘Slick' and by doing so, it helped him to overcome the temptations to drink.

"Every now and then Slick whispers, but having a name for him makes me listen to him differently. And, health-wise, I'd probably be dead by now if I hadn't stopped drinking," exclaims Namath via his autobiography, "All the Way: My Life in Four Quarters."

He admitted to being drunk when he was interviewed by Suzy Kolber during a football game in 2003 in which he told Kolber he wanted to kiss her. This was a turning point in his life as he could not ignore his problem as it was on national television in front of so many people.

Regarding his 2003 interview with Kolber, Namath said, "I saw it as a blessing in disguise. I had embarrassed my friends and family and could not escape that feeling. I haven't had a drink since."

"That shame is where I found my strength to deal with the addiction. With the help of my recovery, I learned that I had used my divorce as an excuse to go back to drinking. That knowledge made me a stronger individual."

His wife at the time, Deborah Mays, warned him that if he did not stop drinking that he would break up his family. While receiving psychological treatment for his drinking in Brentwood, California he admitted to stopping at a liquor store after each session to buy a pint of Vodka.

"I thought I could get away with that, but she could smell it," says Namath.

In 2000, he and his wife, Deborah, divorced, causing his problem with drinking to spiral out of control.

"The drinking was what would kick my butt for a long time," Joe said. "I believe any of us can be brought to our knees whether from physical or emotional pain. Over the years, I learned how fragile we humans can be. Emotionally, I used that as an excuse to start drinking again. ...I would drink all day sometimes."

"I was in my early 20s when this fame hit, living in one of the sexiest cities in the world," replied Namath. "So it felt natural to turn toward it and not shy away. I enjoyed the company of ladies and, man, were there a lot of places servicing the singles crowd."

Namath has been sober for a long time now as he claims to have not had a drink since 2003, but he suffers from other health issues due to concussions that he endured during his playing career. Namath explains that he suffered, "at least a handful" of brain damaging and concussion causing hits while playing quarterback in the AFL/NFL.

The former quarterback has been participating in hyperbaric oxygen therapy at a Medical Center in Jupiter, Florida. "I don't know where I would be today without taking those [hyperbaric] dives because there is absolutely no doubt about the improvement," he says.

Namath is a Super Bowl champion (III) as well as a Super Bowl MVP (III). He was selected to the Pro Bowl in 1972 and was second team All Pro that year too. He won NFL comeback player of the year in 1974 and led the NFL in passing yards and touchdown passes in 1972.

He also led the American Football League https://www.latestsportsbonuses.com/nfl-articles/american-football-league/ in passing yards twice (1966, 1967) and was named to the AFL All Time Team, and the New York Jets retired his number 12. While in college at the University of Alabama he won the NCAA national championship in 1964 and was enshrined into the Pro Football Hall of Fame in 1985.

Over his 13-year long career in professional football (ALF / NFL), he played in 140 games in which he racked up 1,886 completions for 27,663 passing yards as a star quarterback. Namath threw for 173 touchdown passes and finished with a passer rating of 65.5 and rushed for 140 yards and 7 touchdown runs.
Sports Society News Back to articles

Joe Namath lived a great life, but it almost ended up killing him. It's good to hear that he seems to be doing better now after treatment for alcohol and concussions,...

Joe Namath lived a great life, but it almost ended up killing him. It's good to hear that he seems to be doing better now after treatment for alcohol and concussions, as those issues affect so many professional football players.