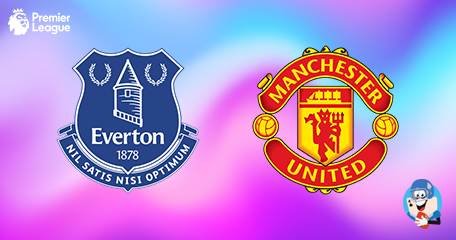 Everton are looking to get back to winning ways and boost their European qualification chances when they host fifth-placed Manchester United in the Premier League at Goodison Park on Sunday. The reverse fixture was played in December at Old Trafford and it ended 1-1. Last season Everton hammered Man United 4-0 at Goodison Park after having lost the reverse fixture 2-1. Overall, Manchester United have won three of the last six direct matches, while Everton have won just one.

Everton had their five-game unbeaten run snapped last weekend when they lost 3-2 at Arsenal despite having led the match 1-0 early on. That was their second Premier League defeat since manager Carlo Ancelotti took charge, the other loss was against defending champions Manchester City. Everton are down in 11th place now, but fifth-placed Manchester United are just five points ahead, so a win in this match could make a huge difference in the race for European qualification. Jean-Philippe Gbamin and Morgan Schneiderlin are out injured, while Lucas Digne and Theo Walcott are doubts.

Manchester United are enjoying a seven-game unbeaten streak in all competitions, last week they grabbed a 3-0 Premier League victory over Watford and this week they hammered Club Brugge 5-0 to secure their place in the UEFA Europa League last sixteen. The Red Devils have not conceded any goals in their last three Premier League matches and are just three points behind fourth-placed Chelsea. However, Anthony Martial has picked up a thigh injury during the Europa League match and might miss out, along with Paul Pogba, Marcus Rashford and Timothy Fosu-Mensah.

Both sides have been in good form lately so we should expect an intense match with chances at both ends, I think this game will end 2-2.