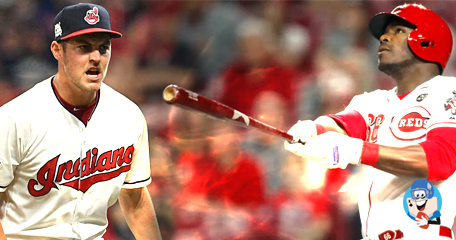 Just prior to the MLB trade deadline of Wednesday, July 31st, 2019 many ball clubs are scrambling to finalize their rosters for the remainder of the 2019 Major League Baseball season. Some organizations are buyers looking to make a push for the postseason while others are sellers trying to stock pile solid young prospects and draft picks to build their teams for future success. There are even particular franchises doing a little of both such as New York.

The first part of this trade involves the Indians sending right-handed starting pitcher, Trevor Bauer, to the Reds.

The Cleveland team will receive outfielder, Yasiel Puig, from the Reds and outfielder, Franmil Reyes, from the San Diego Padres. The Indians also acquired left-handed starting pitcher, Logan Allen, from the Padres as well as minor league infielder, Victor Nova. Minor league pitcher, Scott Moss, is sent to Cleveland Indians from the Cincinnati Reds as well, along with Taylor Trammell, from Cincinnati.

In his last game with the Cincinnati Reds, Puig got ejected shortly after the trade was announced sending him to the Cleveland Indians. The game between the Pittsburgh Pirates and the Reds on Tuesday, July 30th, 2019 broke out into a huge bench clearing brawl in which seven players were tossed for fighting. It was a pretty fitting conclusion for his quick stint in Cincy as Puig is known for being an instigator and hot head.

"I'm going to miss all my teammates here,'' says Puig regarding the trade after his last game with the Reds. "This part of the year is amazing for me, being on this team and the city. Now it's time to move forward and go to my new team and help my team go to the playoffs. ... I want to say thank you to all the city, Cincinnati. We stay next door -- we're going to Cleveland."

Ramifications of the Three-Team Trade:

The Indians are currently only a few games behind the Minnesota Twins in the American League Central, and they are sitting atop the AL wild card standings. With the acquisition of outfielders Puig and Reyes, the tribe is counting on them to add some much needed power hitting to Cleveland’s line up as they near the home stretch of the regular season. I believe the Indians will clinch a postseason spot in this year’s MLB playoff picture.

Cincinnati’s team will most likely not be contending for the National League Central Division. The competition is stiff with teams like the Chicago Cubs, the Milwaukee Brewers, and the St. Louis Cardinals fighting to finish atop the standings in the NL Central. However, the Reds have been playing solid baseball over the last several weeks, and they may be threatening to sneak into the NL wild card landscape with approximately 55 – 60 games remaining in the MLB regular season.

San Diego knows they are still at least two to three years away from building up their team in order to become a serious threat in the National League West Division. Currently teams like the Los Angeles Dodgers, the San Francisco Giants, and the Arizona Diamondbacks dominate the NL West.

They have tied up some big time money in players like Manny Machado and Eric Hosmer. Hopefully, players of that caliber pay off eventually to carry the team into the future while they develop their young and talented prospect that can hopefully blossom into quality big league ball players eventually.

General Sportsbook News Back to articles