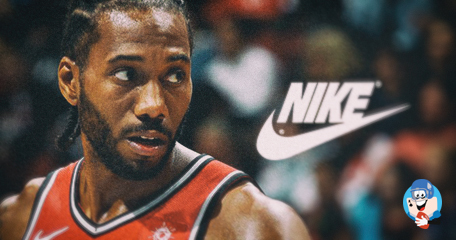 The Toronto Raptor’s biggest star, Kawhi Leonard, is currently in the middle of an intense 2019 NBA Finals series against the Golden State Warriors, but he is making news elsewhere right now for different reasons. The All-Star forward is claiming he created the “Klaw” logo and wants to use it for various purposes such as apparel, sports camps, and charity events. He has stated that Nike is prohibiting him from using the logo as the famous shoe company owns the rights to it.

Origin of the Logo:

Leonard explains that he created the basic format of the logo while in college. He says that he traced his hand and inserted his initials, K L, and uniform number, 2, inside of the handprint. The former NBA Finals MVP further claims to have allowed Nike to use the logo on particular merchandise during an endorsement deal he once had with them, but that the Raptor’s forward could also use the insignia on non-Nike goods at his discretion.

He is also declaring that Nike filed for copyright registration without his knowledge. The shoe giant staked its claim as the designer of the “Klaw” logo while discrediting the basketball player himself as the author of the emblem. Nike has declined to comment on the issue, which is common during legal proceedings.

After the NBA player’s contract with the popular footwear manufacturer expired, he was in the market to sign an endorsement deal with a different shoe company. The “King of the North” signed a new agreement with New Balance, earlier this season. If he wins the lawsuit, he would like to use the logo on a new campaign with NB while maintaining the right to use it in any way he chooses.

Leonard is in the middle of the 2019 NBA Finals series, but he will become one of the most sought after free agents during this upcoming offseason. Teams such as the Toronto Raptors, the Los Angeles Clippers, Los Angeles Lakers, as well as other franchises are looking to sign this all around outstanding basketball player.

It was recently reported that he purchased property in the Toronto area, but it is unclear this is an indication that he is planning on staying with the Raptors after the season ends. Free Agency this offseason will be crazy with all the high caliber athletes that will be available to sign to a new contract.

Read the full legal document here. The following are excerpts from case filing:

“Kawhi Leonard authored a unique logo that included elements that were meaningful and unique to him. Leonard traced his notably large hand, and, inside the hand, drew stylized versions of his initials “KL” and the number that he had worn for much of his career…”

“Unbeknownst to Leonard and without his consent, Nike filed an application for copyright registration of his logo and falsely represented in the application that Nike had authored the logo.”

“…Leonard brings this action seeking a declaratory judgment of non-infringement and that Leonard is the author of the logo and Nike, in registering for copyright of Leonard’s logo, committed fraud on the Copyright Office. “

“Since at least his college years, Leonard contemplated and conceived of ideas for a personal logo which would be unique to him and reflect something meaningful relating to his own image.”