Tennis: Wimbledon cancelled due to coronavirus 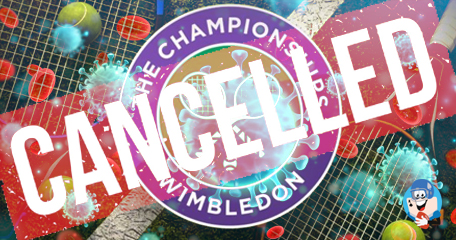 The Wimbledon tournament and the whole grass-court season has now been cancelled due to the coronavirus pandemic. It is the first time since the second World War that the Wimbledon tournament gets cancelled. The tournament was scheduled to start on 29 June and the men's final was supposed to be played on 12 July. The whole grass-court season has now been abandoned, and the first tournaments that could be played starting 13 July could be the Hamburg European Open in Germany, the Hall of Fame Open in Newport, U.S.A., and the Nordea Open in Bastad, Sweden.

Wimbledon was the second Grand Slam tournament of theis season, with the French Open already postponed from May until September due to the coronavirus outbreak. "This is a decision that we have not taken lightly, and we have done so with the highest regard for public health and the wellbeing of all those who come together to make Wimbledon happen," said Ian Hewitt, All England Lawn Tennis Club chairman. "It has weighed heavily on our minds that the staging of the Championships has only been interrupted previously by World Wars but, following thorough and extensive consideration of all scenarios, we believe it is ultimately the right decision to cancel this year's Championships, and instead concentrate on how we can use the breadth of Wimbledon's resources to help those in our local communities and beyond. Our thoughts are with all those who have been and continue to be affected by these unprecedented times."

Along with Wimbledon, several other events got cancelled: ATP events in ‘s-Hertogenbosch, Stuttgart, London-Queen’s, Halle, Mallorca, Eastbourne, and WTA tournaments in ‘s-Hertogenbosch, Nottingham, Birmingham, Berlin, Eastbourne and Bad Homburg. "Regrettably, the ongoing COVID-19 global pandemic leaves us with no choice but to suspend the Tour further - a decision we’ve made in close cooperation with our members and the other governing bodies of tennis," said Andrea Gaudenzi, ATP Chairman. "Health and safety remains the top priority as we navigate the challenges ahead in these unprecedented times, and we will do everything we can for the Tour to resume at the earliest opportunity once it is safe to do so.”

"This was a decision that the WTA and its members did not take lightly, however we remain vigilant in protecting the health and safety of our players, staff and fans,” said Steve Simon, WTA Chairman and CEO. "While we share in the disappointment of the season’s further postponement, our priority remains to support each other during this unprecedented time and work together as a sport in preparation of our return to play."

It is unclear whether there will be any more professional tennis this year. The suspension is until July, in theory, but things could spin out of control if people start moving from one part of the world to another, as they did before the outbreak. 2006 Wimbledon champion Amelie Mauresmo said on Twitter earlier this week: "I think we are going to have to draw a line under the 2020 tennis season. An international circuit = players of all nationalities, as well as coaches, spectators and those coming from all four corners of the world to bring these events to life. No vaccine = no tennis."