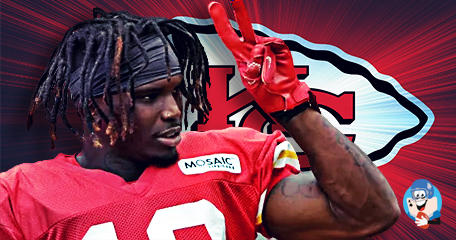 On Friday, September 6th, 2019 the Kansas City Chiefs and their superstar wide receiver, Tyreek Hill, agreed to terms on a three-year, $54 million contract extension. The deal includes $35 million in guaranteed money as well.

This contract extension was granted just prior to the 2019-2020 NFL season but after Hill was cleared by the Kansas City police of his child abuse case. He is considered one of the fastest and most elusive wide receivers in the League at his young age of 25.

For a wide out drafted out of the University of West Alabama, Hill has made a name for himself as one of the best receivers in the NFL throughout his first 3 years of playing professional football. The Kansas City Chiefs were lucky to have selected him with the 165th overall pick in the 2016 NFL draft (5th round).

During the Chief’s first regular season game against the Jacksonville Jaguars Hill ended up breaking his clavicle. Upon the review of the x-rays, the Chiefs medical staff and doctors determined the All Pro wide receiver will have to miss the next several game due to this injury.

He will ultimately not require a surgery that would in effect cause him to miss more extensive time or possibly the remainder of the season. With Hill out Patrick Mahomes, the Kansas City Chiefs will rely upon the services of his other big time pass catchers such as Sammy Watkins, Travis Kelce, and Demarcus Robinson. Watkins had one hell of a start to the season during the Chief’s week one win against the Jacksonville Jaguars.

"The Kansas City Chiefs were lucky to have selected him with the 165th overall pick in the 2016 NFL draft (5th round)." Yeah, what a pick really and what a player...

"The Kansas City Chiefs were lucky to have selected him with the 165th overall pick in the 2016 NFL draft (5th round)." Yeah, what a pick really and what a player he's been for the Chiefs, and obviously they hope will continue to deliver in the next three years granted him with such a high contract despite the contraventions around Hill. By the way Mahomes is not that bad of a pick either being 10th overall ; )