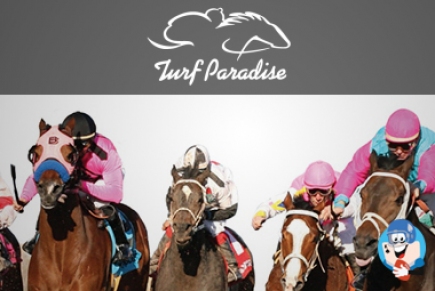 There is something about women and horses. They have an invisible connection, a silver umbilical cord, that no one can see but which is always there.

Two women in my life seemed to hold extraordinary powers when it came to horses. One was my then wife's younger sister, Linda. The other was my wife, Nan.

The three of us were at Turf Paradise Race Track one sunny day in Phoenix, AZ. I had my usual Daily Racing Form and was poring over past results and workouts to try to find a winner.

Not Linda. She was standing next to the paddock looking at the horses.

'I like that one,' she said, pointing at a chestnut four-year-old. 'He looks like he's going to win.'

I checked the horse listed at 10-1 odds on the tote board. Its background didn't look that impressive, and I shook my head. I bet on a horse that went off at 5-2. My horse finished fourth. Linda's choice won the race and paid $22 for each $2 wagered.

I was at Turf Paradise with Bonnie one afternoon when she picked a 20-1 shot. The horse was a first-time starter in a maiden race. Its workouts were not great and I chose another horse that looked better on paper. Bonnie's horse easily won the race from the rail to the finish line.

My wife and I had an apartment in Arcadia, CA. just a couple of miles from Santa Anita Race Track. I was a reporter on the Los Angeles Herald-Examiner covering police and the courts. Our horse handicapper who wrote a column on the sports pages was Dr. Gordon Jones.

The leading jockey at Santa Anita was the legendary Willie Shoemaker, who preferred to be called Bill. He had suffered a serious accident when a horse he was riding fell when leaving the starting gate.

Shoemaker had been out of action for several weeks recovering from his injuries. When he returned to Santa Anita to ride, I took my wife there for the day.

At the track, I looked at the entries. Shoemaker was scheduled to ride five horses.

'Are you going to bet on Willie?,' Nan said.

'Nope. He had a bad accident and it's going to take some time for him to get his confidence back,' I said.

Nan shook her head. 'Better watch out. Willie wants to prove he's still champion. He might fool you.'

Shoemaker fooled all of us. That day he rode five winners and I tore up losing tickets.

William Lee 'Bill' Shoemaker weighed just two and a half pounds when he was born in Fabens, TX. on Aug. 19, 1931. He was so small he was put in a shoebox and placed in an oven to stay warm. Doctors did not expect him to survive the night.

Shoemaker grew to four feet 11 and weighed 105 pounds. He dropped out of El Monte High School to ride horses.

During his four decades as a jockey, Shoemaker rode in 40,350 races and won 8,833 of them. His wins included 11 Triple Crowns, four Kentucky Derbies and four Belmont Stakes.

On Feb. 3, 1990, he rode his last race, finishing fourth. After that he became a trainer, winning about eight percent of the races he entered his horses in and winning over $3.5 million in purses.

In 1991, he was involved in a single-car accident after having some drinks. The car rolled down an embankment and Willie was left permanently paralyzed. He sued Ford Motor Co. and was awarded a $1 million settlement.

After his retirement from racing, Shoemaker wrote three mystery novels. His main character was a retired jockey turned detective and all the plots had a story line that focused around a race track. Shoemaker died on Oct. 12, 2003, at the age of 72.
Land Based Sportsbook News Back to articles