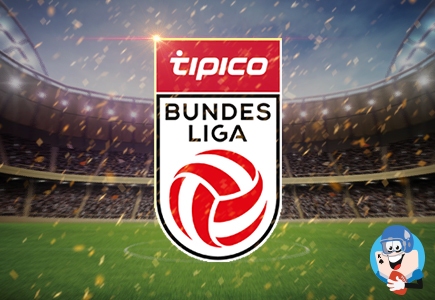 Tipico, leading provider of sports betting in Germany whose price tag reached $1 billion in 2016, has signed a new sponsorship with Austrian Bundesliga, extending throughout 2018-19 and 2019-20 campaigns. The company has agreed to sponsor the top-ranked football league for another two seasons after a successful four-year partnership, which promoted the development of the Austrian National Football League and its clubs whose number will increase from 10 to 12 in the upcoming season.

According to the chief commercial officer, Marlon van der Goes, Tipico’s undertaking in Austria has shown outstanding performance and stunning results. The team is more than happy to sign another contract with ABL and continue to provide first-class service and entertainment, backed up by the latest news, background information, mobile platforms and more. Apart from promoting constant development, trust and commitment, which is highly appreciated among all sportbooks, the group is ready to start a new chapter in its history, adds van der Goes.

In January, the betting shop also signed an agreement with the German Football League, promising to sponsor both Bundesliga and 2. Bundesliga domestic club championships up until 2020-21. Christian Ebenbauer, CEO of Austria’s National Football League is pleased with the extension of partnership and has announced an innovative new era, even though the competition remains under the same.

Tipico is also the platinum partner of FC Bayern Munich and offers a unique opportunity to those who bet on football; by placing a wager on Robert Lewandowski in season 2018/2019, players are entitled to odds 1.1 for at least one goal or 6.0 for changing the club. However, in a brief interview with Bayern Munich’s chairman, Karl-Heinz Rummenigge, it was confirmed that the Polish goal-getter will stay for another season.