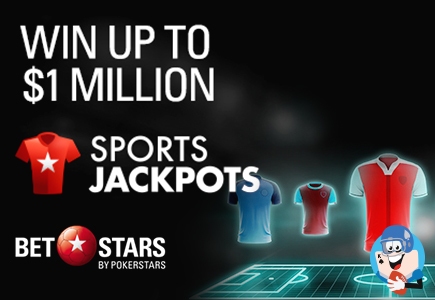 PokerStars, often referred to as the largest poker site on the internet has officially gone live with a new Sports Jackpots product via its BetStars brand, developed in partnership with Amaya’s StarsDraft. The inspiration behind this latest concept was to develop an easier way to engage in fantasy sports, via simplified daily tournaments, and to serve as an intro for beginners. The kicker? It allows players to snag prizes up to $1 million!

Prizes are typically awarded to the top 25% of users, with scores accumulated on a designated leaderboard. The highest prize of $1 million may be awarded to a user who selects the fantasy player who winds up with the highest score in each pre-selected group. Those who do not accurately do so, are not completely out of luck, as CONSOLATION PRIZES are awarded.

According to chief executive of StarsDraft, Matthew Primeaux, commented, "Our team is excited to work with the fast-growing BetStars brand to further the mission of bringing much needed innovation to the sports betting market. With BetStars Sports Jackpots, there’s no easier way for punters and casual sports fans alike to turn a small bet into a big win."

As of now, this new product is accessible on tournaments for the Europa League, Champions League, English Premier League, and National Basketball Association. $3 marks the starting rate for minimum buy-ins.

Zeno Ossko, BetStars managing director, added, "Football fans will be able to enjoy an added sweat by complementing sports book action with BetStars Sports Jackpots. It's a fun, quick, and easy way to get the thrill of fantasy sports without having to commit to a whole season."