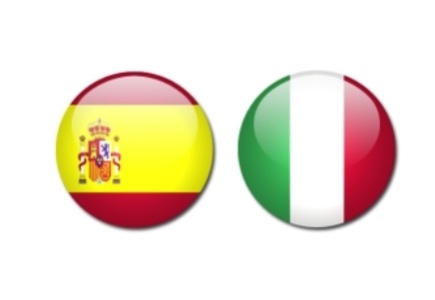 Spain and Italy shared the points after a splendig opening Group C encounter at the Arena Gdansk. It was one of the most anticipated games of the Championship and the two teams did not let their fans down. Substitute Antonio Di Natale gave Italy a 61st-minute lead before Cesc Fàbregas bagged the equaliser minutes later.

Fàbregas, the FC Barcelona midfielder, was coach Vicente Del Bosque's surprise in the starting line up as he was offered a forward role instead of the likes of Álvaro Negredo, Fernando Llorente or Fernando Torres.

It was David Silva who created the first threats in the early stages with efforts from distance while Italy responded through veteran Andrea Pirlo who tested Iker Casillas with a vicious low shot from a free kick. Then the Real Madrid goalie denied Antonio Cassano before Iniesta fired one over the bar at the other end. Chances kept coming as Casillas proved his class again to stop Thiago Motta.

Then Mario Balotelli robbed Sergio Ramos in the second half and could have scored but the Real Madrid defender dispossessed the young striker with a resolute last ditch tackle. Then Di Natale came in for Balotelli and the Udinese captain made an instant impact by firing past Casillas after receiving a perfect through ball from Pirlo.

The Italians' joy was short-lived though as Fabregas levelled the score after a delightful move created by Iniesta and Silva. The game became even more intense after that goal and substitute Fernando Torres could have put Spain in front but he wasted a huge chance as his lob from the edge of the area went over the bar.
General Sportsbook News Sports Events Back to articles

I really wanted Spain to win this one!