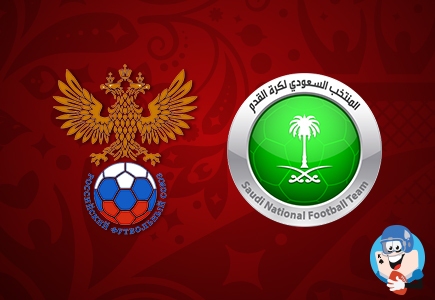 The opening match of the 2018 FIFA World Cup will take place on Thursday, when host nation Russia will take on Saudi Arabia in Group A at Luzhniki Arena in Moscow. The two nations have never met before on the international stage, even though both have participated in a few past editions of the World Cup. Russia have qualified directly for the World Cup as host nation, while Saudi Arabia had to go through the Asian section of qualifying to make it to the final tournament.

Russia have been waiting for this moment for a long time, this is the first World Cup that they host so it's an important event for the whole nation. The pressure will be on the home side on Thursday evening and that might work against them, especially considering that they didn't have the best results during their warm-up friendly matches. In fact, they have not won any of their last seven games, their last victory was 4-2 against South Korea back in October 2017. At the end of May they lost 1-0 against Austria and a few days later they were held to a 1-1 draw by Turkey. Russia have not managed to get past the group stage at the World Cup since 1986, they are certainly hoping that this time they will pull that off.

This is a special occasion for Saudi Arabia as well, because they are back at the final tournament after having failed to qualify in 2010 and 2014. They have lost their last three friendly matches but they did have good wins over Greece and Algeria before that. Saudi Arabia qualified for the World Cup after having finished second behind Japan in the Asian qualification group and they have played no less than nine friendly matches this year. They have won just three, but their last defeat was a creditable 2-1 loss against reigning world champions Germany. This is the fifth World Cup for Saudi Arabia and they have qualified from the group stage just once, in 1994.

My prediction: 1-1 draw, Russia have not been looking strong lately and they will be under enormous pressure.

I think even the fans in Russia have been surprised how well the team had done in the opening game, they were really effective, scoring in almost every situation...

I think even the fans in Russia have been surprised how well the team had done in the opening game, they were really effective, scoring in almost every situation they've created in front of opponents goal. As for the Saudi Arabia, I just don't think they're good enough to be on that event and don't mean just the playesr but coaches, management and organisation as a whole. So the real tests for the Russians will come in their next games but after that performance it's hard to imagine that they'll have any troubles entering the next stage from this particular group.