Get A 50% Free Bonus On Football Bets at Bovada 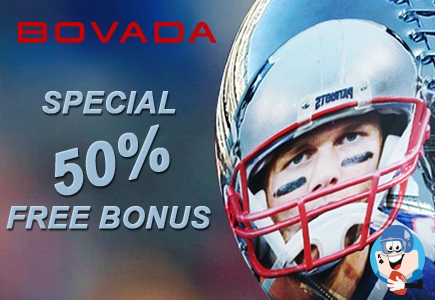 It’s official; the New England Patriots and the Atlanta Falcons will play this year’s Super Bowl, scheduled to take place on Sunday, February 5th at Houston’s NRG Stadium. 2017 marks the event’s 51st year, and thus far, the Patriots are the favorite to win, with a total of 59.5 points, which is no surprise given their track record. This year marks their 9th time appearing in the Super Bowl, while it is only the 2nd for the Falcons.

Patriots quarterback, Tom Brady, may very well earn his fourth Super Bowl MVP honors, with +150 at press time, while Matt Ryan, Falcons quarterback is behind him at +230, and is in line to score the title of regular season MVP.

While the New England team is the favorite, there’s a likely chance that the Falcons can win it all, considering the fact that the last four Super Bowls have been won by underdogs.

This year also brings a couple of new things in regards to the half time show. Lady Gaga will take the stage, and she will be performing completely alone, and has been reportedly given the clearance to do so with no limits. Thus far, it has been rumored that she plans to perform on the top of the stadium, which will require the retractable roof to remain closed throughout the game.

Bovada players can also look forward to a 50% free bonus when betting on football. The site first debuted online in 2011, and serves as a one-stop shop where players can gain instant access to trends, matchup details, game previews and more, prior to placing bets.
Sportsbook Promotions Back to articles

Now doubt every year Super Bowl is the main event in the sports living in US and one of the major sport events all across the world. I'm surprised that the Patriots...

Now doubt every year Super Bowl is the main event in the sports living in US and one of the major sport events all across the world. I'm surprised that the Patriots are favourites because of the Falcons performance so far in the season but it would be definitely a great battle and I'm not sure who's going to win it. Bovada offer is certainly a great opportunity for all these who want to have an extra excitement from the game by placing a bet (outside of the excitement of Lady Gaga being on the roof of course; )