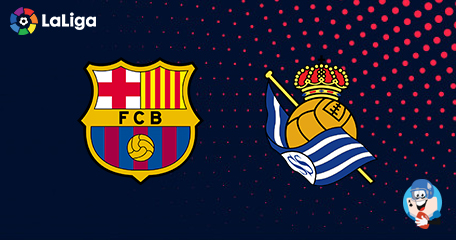 Defending LaLiga champions Barcelona are hoping to bounce back from last week's derby defeat when they host Real Sociedad at Camp Nou on Saturday. The reverse fixture was quite tricky for the Blaugrana, it ended 2-2 after Real Sociedad had led 1-0 early on. That draw interrupted a streak of seven consecutive wins for Barcelona against Sociedad in all competitions. The last time Real Sociedad defeated Barcelona was in 2016.

Barcelona suffered a big blow to their title chances last week as they lost 2-0 at rivals Real Madrid, who leapfrogged them at the top of the table. The difference between the two sides is just one point, though, and there are 12 matches left to play this season. Barcelona have won 12 of their 13 home matches in LaLiga this season, their only draw was the 0-0 against Real Madrid in December. The home side continue to be without Sergi Roberto, Luis Suarez and Ousmane Dembele, and head coach Quique Setien will most likely choose to field Lionel Messi and Antoine Griezmann in attack, with Arturo Vidal supporting them.

Real Sociedad had a very good season so far, they are sixth in the table at the moment but they have a game in hand that could take them all the way up to third place if they win it. They have won their last six matches in all competitions and have not conceded any goals in the last three. This week they booked their ticket for the Copa del Rey final after a 3-1 aggregate victory over second-division side Mirandes. Overall, Real Sociedad have won nine of their last ten competitive matches, impressive form by any standards. Asier Illarramendi and Diego Llorente are the only injury concers for the visitors.

This will be a very tough match for Barcelona and I doubt they will win it, I think Real Sociedad will be able to snatch a 1-1 draw at Camp Nou.

I thought it been a really arguable penalty decision that granted Barcelona the victory in this one...a sloppy approach by the Sosiedad defender to the ball but...

I thought it been a really arguable penalty decision that granted Barcelona the victory in this one...a sloppy approach by the Sosiedad defender to the ball but it looked like the ball hit him on the shoulder not even the penalty decision but more so Vidal was in offside situation in the moment of the original free kick cross...and influencing the situation by playing the ball...how the hell that's not an offside!?! Sometimes can't understand the VAR decisions at all...