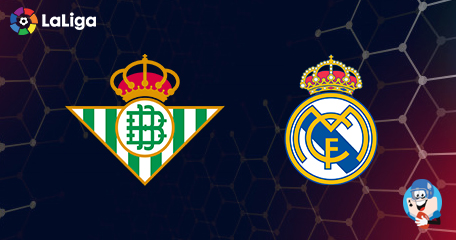 LaLiga leaders Real Madrid are hoping to keep their momentum and record a second consecutive win when they visit 14th-placed Betis at Benito Villamarin Stadium in Seville on Sunday. The reverse fixture was played in November and it ended goalless, while last season Betis pulled off a major upset when they defeated Real Madrid 2-0 at Santiago Bernabeu. Overall, Real Madrid have won three of the last six direct matches, while Betis have won two, both of them in Madrid.

Betis are having a pretty rough season and they are on a rather poor run at the moment, with no victories in their last seven matches in all competitions. Last week they lost 2-1 at Valencia and dropped to 14th place in the league table, but they are still eight points above the relegation zone. They played at home against Barcelona in February and nearly pulled off an upset, they had a 2-1 lead in the first half but eventually lost 3-2. Juanmi is the only injury concern for the home side.

Real Madrid grabbed a vital 2-0 victory over rivals Barcelona in the derby last weekend, that result allowed them to move back up into the top spot of the league table and it also ended a run of three games without a win in all competitions. The title race will most likely be extremely close this season, there's just one point between the two rivals with 12 matches left to play. Eden Hazard and Marco Asensio are out injured for the league leaders, while Vinicius Junior is expected to make the starting eleven after having scored a decisive goal in the derby last weekend.

Betis are under pressure after seven matches without a win, but they also don't have anything to lose against such an illustrious opponent. I expect the home side to play well, but Real Madrid should be able to grab a 2-1 win.

Real Madrid have made another step in the wrong direction after just week after they beat Barcelona and getting top of the table in Spain. I don't think both of...

Real Madrid have made another step in the wrong direction after just week after they beat Barcelona and getting top of the table in Spain. I don't think both of the Spanish grands are a very good sides this season but I thought Real m will get the underhand in the end but they keep proving me wrong with a poor performances like in that Betis game...Barcelona are pretty average side themselves (excluding Messi) so who knows what's about to happen till the end if this season would ever going to finish at all.