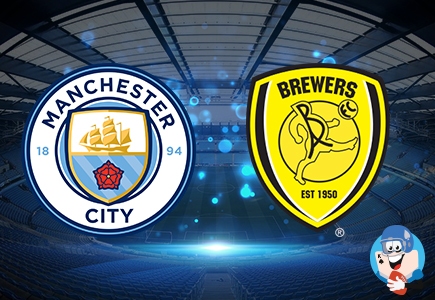 League One side Burton Albion will be looking to cause the biggest upset of the season as they visit defending Premier League champions Manchester City at the Etihad Stadium on Wednesday for the first leg of their League Cup semi-final tie. The two teams never met before. The Citizens did meet the former team from Burton, the Wanderers, six times before, but all those meetings were before the year 1900! Manchester City won just one of those six matches, a 2-1 victory in League Division Two all the way back in 1896. The following year, 1897, saw the two teams record a 1-1 draw in the reverse fixture. Burton Wanderers have beaten Manchester City twice, 8-0 in 1894 and 4-1 in 1895.

Manchester City can't afford a setback against Burton, the League Cup is up for grabs and they definitely will want to secure it. However, manager Pep Guardiola will surely make some changes in his starting eleven because the Citizens are going through a busy period and the players' fitness must be carefully managed. 2019 has started very well for Manchester City, they reopened the Premier League title race with a 2-1 victory over leaders Liverpool last week and then won 7-0 against Rotherham in the FA Cup. Fabian Delph could return to the starting eleven after having served his suspension, but Benjamin Mendy and Eliaquim Mangala remain sidelined.

Burton are going through a pretty good period, probably their best of the season so far, as they are unbeaten in their last four matches. Last weekend they secured a 4-0 victory at Rochdale to move up to ninth place in the League One table, ten points away from the last playoff place. Moreover, the Brewers have conceded just two goals in those last four matches, an encouraging record ahead of a match against Manchester City. In the previous round Burton knocked out Championship side Middlesbrough with a 1-0 victory, and before that they went past Nottingham, Burnley and Aston Villa. Stephen Quinn, Marvin Sordell and Kyle McFadzean are injured.

My prediction: Manchester City to win 3-0, this will most likely be the end of the road for Burton.

Manchester City have demolished the Burton side...well done. I think 5 or 6-0 would it be enough but the Guardiola men keep pushing chasing high scores and records...

Manchester City have demolished the Burton side...well done. I think 5 or 6-0 would it be enough but the Guardiola men keep pushing chasing high scores and records over an opponent way bellow their weight. I'm not saying they just have to stop playing after scoring 6 or 7 but it's pretty obvious they wanted to humiliate the league one side..but I'm still waiting for City to show that character in some of the biggest games in the CL instead an opponent two leagues lower level than them. I think I'll have to wait beyond this season for that probably.