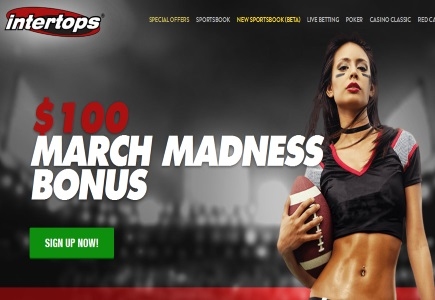 With U.S. college basketball at its height, Intertops Sportsbook, will be offering exciting March Madness offers. They have been taking online sports bets since 1996 and provide odds all throughout the year for NFL, NBA, European soccer and others.

As teams compete in regional tournaments to become a part of the Final Four, in order to claim the national title, Intertops will give its players access to NCAAB odds on every matchup, while also providing them with plenty of ways to win, including a bonus, free bet, and annual bracket contest.

Odds on the First, Second and Third Rounds will take place between March 17th and the 21st, Regionals between March 26th and the 28th, National Semifinals on April 4th, and finally, the ultimate NCAAB Championship on April 6th.

“At 34-0 for the season Kentucky is obviously the best in the country and quite possibly the best college basketball team we've seen in many years. Outside of the top four, early wagering would indicate that Notre Dame and Gonzaga could be teams to watch,” comments, Sportsbook manager.

The bracket contest will consist of a $25,000 payout for a perfect bracket, made up of 63 correct picks. Players must be quick to make their selections, as entries will only be accepted until the start of the second round games on March 19th.

Intertops Sportsbook manager, has some good news about the bracket contest as well, stating “One way or another we're paying out on this one. Even if no one picks a perfect bracket, we'll divide the $25K between the 25 players with the most correct picks.”

A March Madness Free bet is also up for grabs. Those who wager a minimum of $1,000 on the NCAA Men's Division 1 Basketball Championship tournament by March 29th, will gain access to a $100 Hoops Free Bet the following day.

Finally, through March 25th, the site will be adding an additional 20% to one deposit for players.


Promotions & Bonuses Back to articles

Intertops is one of the most famous and great online sportsbooks and they offer nice promotions on regular bases for their loyal customers. This March Madness bonus...

Intertops is one of the most famous and great online sportsbooks and they offer nice promotions on regular bases for their loyal customers. This March Madness bonus is directed mostly towards the American market when the college basketball is very popular but still a nice promotion for anyone who is interested in it.