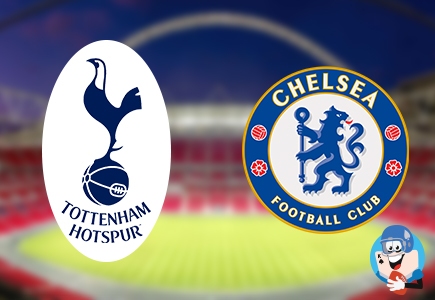 The first leg of the first League Cup semi-final tie will take place at Wembley Stadium on Tuesday, when Tottenham host London rivals Chelsea. The two teams have already met at this venue earlier this season, and Tottenham won that Premier League match 3-1 with goals from Dele Alli, Harry Kane and Son Heung-Min. That was the second consecutive win for Tottenham against Chelsea after the Blues had a two-game winning streak of their own. Overall, the record of the last six direct meetings shows a perfectly balanced situation, with three victories apiece. The two teams have met in the final of the League Cup in 2015 and Chelsea claimed the trophy with a 2-0 win.

Tottenham have started the New Year very well, they have won two matches out of two, scored ten goals and didn't concede any. However, their victories were against Cardiff in the Premier League and Tranmere in the FA Cup, both these teams are not nearly as strong as Chelsea. The Spurs are third in the Premier League table, four points above fourth-placed Chelsea and six points behind leaders Liverpool. In the previous round of the League Cup they knocked out North London rivals Arsenal with a 2-0 victory at the Emirates Stadium. Victor Wanyama, Vincent Janssen and Eric Dier are all ruled out, but Erik Lamela should be available again after having missed the FA Cup match due to illness.

Chelsea are on a four-match unbeaten run in all competition, but their ability to score goals seems to have vanished. That streak includes a goalless home draw against struggling Southampton and a narrow 1-0 victory at Crystal Palace. Last week the Blues grabbed a 2-0 victory over Nottingham in the FA Cup thanks to a double from Alvaro Morata. That was the last match for Cesc Fabregas in the Chelsea shirt, the Spaniard will join French side AS Monaco. Ruben Loftus-Cheek got a back injury during last weekend's FA Cup match and won't be available on Tuesday, while Willian, Pedro, Olivier Giroud and Mateo Kovacic are injury doubts.

My prediction: Tottenham to win 1-0, the Spurs seem in better shape than Chelsea at the moment.

Another good guess Johnny, well done mate! I think Spurs have played a solid game in this one and probably the end result is quite fair to both teams although...

Another good guess Johnny, well done mate! I think Spurs have played a solid game in this one and probably the end result is quite fair to both teams although Chelsea had some good chances in the second half. This is a result which gives both teams a hope for the second leg and if Spurs approach is too defensive in that they could pay the price I think. Would like to see the Spurs team to win any trophy this season even if it's this one but it won't be easy and they would have to show if they have the character to do it against Chelsea and then in a potential final v City. Tough task but not impossible...it's about class too but mainly character at this stage I think.